Chef Kristy Carlucci brings 10+yrs of pastry experience to Valencia College. She is currently the Executive Pastry Chef of The Osprey Tavern, as well as Pastry Consultant of Seito Sushi and Reyes Mezcaleria, all in Orlando, FL. Chef Carlucci gained a strong set of fundamentals while studying Baking and Pastry Arts at The Culinary Institute of America in Hyde Park, NY. She has developed and strengthened her skills under the tutelage of such kitchen luminaries as Richard Rosendale CMC, Francisco J. Migoya CMB, and Chef Angela Hartnett. She has worked in various hotels, country clubs, restaurants, and patisseries throughout the United States, baking for celebrities, professional athletes, and political figures. Locally, she has served as Pastry Chef de Cuisine at Cask & Larder in Winter Park.
Kristy has been featured in local publications such as Orlando Sentinel, Orlando Weekly, Orlando Magazine, and Edible Orlando. She has also been shown in Pastry & Baking North America. In 2016 she was a finalist in “Best of Orlando-Best Desserts” and has been revered by many Orlando food critics and bloggers. In 2015, Kristy teamed up with Honey Nut Cheerios and created an exclusive recipe for their “real honey” promotion. She has earned mentions with the James Beard Foundation through her work with Beard in Baldwin, a large food and wine festival in Orlando, as well as having the opportunity to cook for the James Beard House. 2019 has been an exciting year for Kristy. In May, she was inducted into Orlando Magazine’s Dining Awards Hall of Fame. She was once again a finalist for “Best of Orlando-Best Desserts”. In August, she was invited to cook alongside Ming Tsai, Dean Fearing, and Edward Lee for Norman Van Aken’s “Movin’ On Out” Gala. She also presented a demonstration at the ACF National Convention. In September, you can see her at the Florida Restaurant and Lodging Show.
Chef Carlucci understands the importance of learning the fundamentals of baking & pastry, while keeping a close eye on detail. 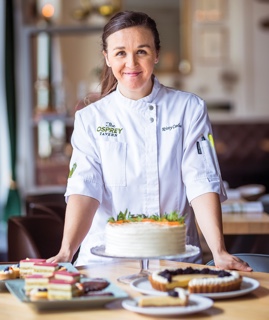