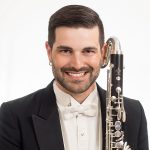 
MUL 1017 History and Appreciation of Jazz and Rock