I started my journey with physics in a small bookstore in Ottawa, Canada. In the summer of ’99, a popular book about the quest for a grand-unified-theory captured my attention, and in a few weeks sent my imagination on the ride of a lifetime.

I was already trained as a civil engineer at the time, but could not stop thinking about physics. I marched to Carleton University; scheduled a meeting with the chair of the physics department; and a few years later walked out with a BSc in Applied Physics.

Close to the end of my undergraduate studies, I became enamored with the mysteries of quantum mechanics, and fascinated by the power of object-oriented programming. As “luck” would have it, Dr Raymond Laflamme was on a speaking tour across Canada at that time, recruiting for the budding field of quantum information processing (QIP). I was instantly hooked by the premise, and followed Ray to the Institute for Quantum Computing at the University of Waterloo, Waterloo, Canada, in the hopes that a concentrated study of QIP would help me understand the nature of nature on the most fundamental levels.

I then happily toiled in academic labs for more than a decade, helping to sort out some of the fundamental challenges toward building a quantum computer, and rephrasing my questions about nature in the language of QIP. This journey in fact helped to shed some light on some of my most fundamental questions, but in effect raised more questions than it answered.

I came to Florida to solve a “two-body problem,” and found a career in teaching at Valencia College and UCF since 2016.

I am always up for a conversation about the foundations and interpretations of quantum theory, the philosophy of science, and ceramics. 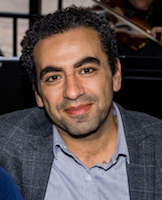 or email for appointment.

This is a link to the zoom meeting room. You must be signed in with your valencia zoom account to join the meeting. If the meeting is not on, or you are not able to access it, then send me a message on the zoom chat in the app, or inbox on Canvas.

YouTube Channel: On this channel, I show my solutions to some of the physics problems that come up in a typical introductory physics class: For the Love of Physics